EYES ON THE HORIZON

In 1954 Hilton bought up his main competitor, Statler Hotels, for $111m—at the time, the largest business deal in US history.
Hilton was riding high, but then came the Great Depression. He lost three of his eight hotels, and in 1931 was forced to sell his company as Wall Street foundered. These were dark times, but he wasn’t a man to let global financial collapse weigh him down for long. He had an iron self-belief and a ‘dare to dream’ attitude that others found irresistible.

It was in the midst of this catastrophe that he first saw a picture of the newly built Waldorf-Astoria in New York. As he writes in ‘Be My Guest’, immediately, he was in love. “When I read of such luxuries as a private railroad siding in the basement … five hundred waiters [and] one hundred dishwashers, not to mention two thousand rooms, I was beating my way around Texas half hidden under a ten-gallon hat, existing on a voluntary loan from a bellboy.” (One of Hilton’s bellhops, Eddie Fowler, had selflessly approached the bankrupted Hilton offering him his life savings of $500.)

“My laundry was in hock and a gun-toting constable was trying to find places to hang up the court judgments against me,” Hilton wrote. “It was a presumptuous, an outrageous, time to dream.” But dream, he certainly did. He cut the picture out, and wrote on it “The Greatest Of Them All.” Just fifteen years later, the Waldorf-Astoria New York was his.

Conrad Hilton ended up building the most impressive and lasting empire of hotels in the world. In 1954 he bought up his main competitor—Statler Hotels—for $111 million. It was, at the time, the largest business deal in US history. When he died, he left behind a billion-dollar philanthropic legacy and multiple globally-recognized brands named after him. But he was more than just a captain of industry. He morphed into something beyond that.

With the success of his autobiography, appearance on the covers of ‘Time’ magazine, in the newspapers and on television (he even enjoyed a brief marriage to the bombshell movie actress, Zsa Zsa Gabor), he became a household name: a singular icon of entrepreneurship in western popular culture.

The boy from Socorro County’s audacity to dream, his tenacity, and the fact that his eyes were always set firmly on the horizon, means the name Conrad Hilton still inspires all of us on adventures in business today. 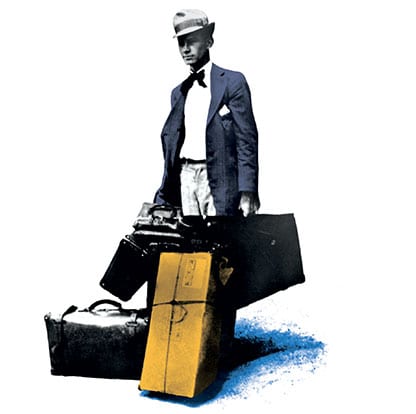 Category : FEATURES
*Standard Wi-Fi is free. Premium (if available) has a fee. Not free at properties with a resort charge