THE RACE FOR HEADSPACE

By Caiti Grove
Celebrated new york-based graphic designer and typographer Stefan Sagmeister takes a leisurely year-long sabbatical every seven years. Yet his business continues to go from strength to strength. Conrad Magazine asks him, is slacking off the new leaning in?
Today, being stressed-out is a sign of status. Rushing around and looking exhausted denotes kudos, switched-on professionalism and being ‘in-demand’ while extended leave from work is deemed deeply suspicious; the audacious preserve of post-college dreamers or piggybank-smashing retirees. So, by modern standards, designer Stefan Sagmeister’s regular practice of taking a year-long sabbatical every seven years seems lax, bordering on the crazy. Yet, the highly-respected aesthete says, it could be your best strategy for ramping up your company’s productivity, even taking into account the harsh realities of today’s economic climate.

Sagmeister is a big name in a competitive industry, creating album-sleeves for the likes of Kanye West, Lou Reed, David Byrne and Brian Eno, yet he is undeterred by modern mores and pressures. Even when the work is flooding in, he shutters his studio blinds and makes for a beach or even a straight-forward change of urban scene. “I took my first sabbatical in New York City,” he says with a serene smile. “The most beautiful landscapes I have seen are in Asia, in Sri Lanka and Bali. [At the time] Sri Lanka’s civil war was still going on, so Bali it was. It’s a wonderful, very craft-oriented society.”

The break had an immediate and dynamic impact on his design, he attests. Small projects gave way to larger ones and soon he began to succeed with innovative solutions to unwieldy design problems that had once baffled him.

“We were asked to design an identity for Casa da Musica, the Rem Koolhaas-built music center in Porto, Portugal. It was a prestigious job with huge potential for industry visibility,” he says. He spent that sabbatical year pondering the creative solution and, eventually, alighted on a new approach. He conceived the task as one great logo, based on the architecture of the complex building itself. The client loved the result and the solution is still held up in industry circles as an example of greatly flexible and innovative design. (Sagmeister tells us more about how he took the solution to his creative team at Sagmeister & Walsh Inc. in detail below.)

The break clearly renewed a hunger for fresh thinking in Sagmeister and he reports that every ‘ruse’ he conjures during the year of his sabbatical is developed in the following seven years back in the studio, often to great profit. Now an influential speaker on the online and conference platform TED, he is making a name for himself by thinking about time and work differently. Even for those not in creative industries, his story makes a compelling argument.

His TED talk ‘The Power of Time Off’ (watched over 2,393,660 times) features sobering graphs that illustrate how, for long periods in many of our lives, work dominates and leisure and learning takes a back seat. People are commonly required to work until 67 or 68 years old (the projection is for longer in the future), and pressure to shorten the time spent in education is heightening. This just reinforces Sagmeister’s prognosis. Too much work and too little reflection makes enterprise a dull place.

The center of his approach is that a year’s ‘down tools’ is actually productive. Taking a break from everyday business and absorbing a fresh environment brings an altered perspective to your work and can make us all more economically productive. Definitely a message to take to the boss.

INSIDE SAGMEISTER & WALSH INC.
Stefan Sagmeister tells us how taking time off translates to team inspiration and great work that builds momentum.
NEW APPROACHES
THE CASA DA MUSICA PROJECT
“Our goal was to show the many different kinds of music performed in one building. Our initial desire to design an identity without featuring the [iconic Rem Koolhaas] structure proved impossible because as we studied it, we realized that the building itself is a logo. But we avoided another rendering by developing a system where this recognizable, unique, modern form transforms itself like a chameleon from application to application, changes from media to media where the physical building itself is the ultimate rendering in a long line of logos. Depending on the music it is filled with, the house changes its character and works dice-like by displaying different views and facets of music.” 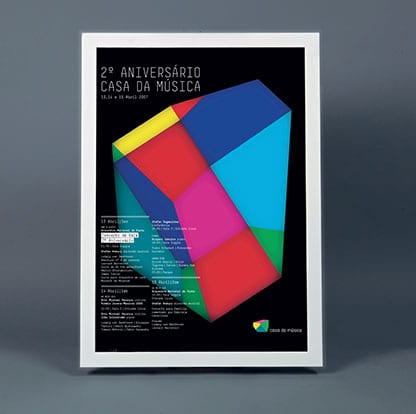 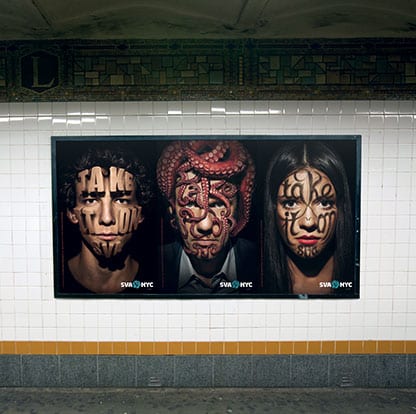 Take It On SVA campaign.

FRESH PERSPECTIVES
INKING OUR IDENTITY
“We looked around our studio and realized that the Sagmeister & Walsh team is rooted in the New York School of Visual Arts (SVA) community. Stefan teaches at the Master of Fine Art Design department and Jessica teaches at the Bachelor of Fine Art Design department. Santiago was a student in the BFA Design department. We embraced the maxim by literally taking the typography on our faces. We worked with renowned photographer Henry Leutwyler and creative retoucher Erik Johansson to achieve this poster series [‘Take it On’], which is now displayed throughout the NYC subway stations.”
Category : FEATURES
*Standard Wi-Fi is free. Premium (if available) has a fee. Not free at properties with a resort charge